Meadow honey and an education from Kosovo’s largest apiary

Posted on August 3, 2012 by elizabethgowing 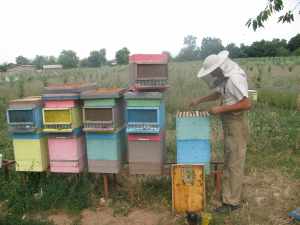 Today’s honey was a gift from the owner of Apikos, the largest apiary in Kosovo. Though with only about 400 hives, the enterprise is still small – family sized let’s say – and friendly. The company produces not only this dark, rich ‘meadow honey’ but acacia, chestnut and mountain honey. And they breed queen bees, carry out varroa treatments (200 000 Kosovan hives so far), extract propolis and royal jelly and make beeswax sheets for beekeepers to use as starters for their colonies.

Ferim, the manager, flaps one of these sheets in my face and I have the warm, faintly honeyed scent of beeswax. ‘Smell it!’ he urges me. ‘There’s no paraffin in there – not like some beeswax starter sheets you get.’ I ask whether he produces other things with the beeswax – candles, for example – but he tuts a reply.

‘It would be mekat‘ – a sin – he says, when there is so little wax available (a hive will only produce a kilo per year), and the bees need it. ‘Let the humans use paraffin for their candles, and the bees can keep their wax to build the nests for their young, to package their food safely, to breathe in the summer…’ he made me feel like a burglar to have pillaged this idyllic habitat for the tapers I prize at home. Despite this business’ size they are keen to stay true to the values which make good beekeepers – as Ferim’s uncle says, “if you have too much honey you get to the point where you make the mistake of saying ‘it’s my honey’, but actually it’s always the bees’ honey”.

His business offers a service to local beekeepers who can bring in the empty comb after they’ve harvested the honey, and he will melt it down and make it into starter sheets for the next season. As he shows me round his equipment I take in the rich dark molassses smell of melting wax and honey which infuses the whole workspace. I ask him what he does with the old wooden frames once the wax has been cut out for melting, looking at the pile of old frames spilling out of a shed. He tells me that they burn the frames for the fire used for making the traditional Albanian dish fli (since this is so delicious with honey I plan to write a post about it sometime soon, but in the meantime, visualise a thick stack of pancakes layered with butter and cream, and baked into a rich, heavy dish over an open fire with a dome above it covered with hot coals to crisp it). As the frames all have residual wax stuck about them, I think about the delicious smell that would rise up from burning this wood for making such indulgent food. 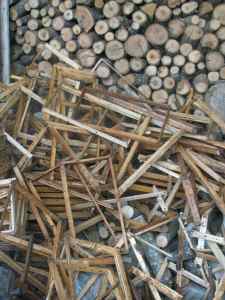 Visiting the bees at work producing all this wax (and my fabulous honey) likewise promises delicious food to come. Ferim’s uncle tells me about the rich pasturing for bees in this area of Kosovo (Peja, near the stunning Accursed Mountains) which apparently has 127 species of nectar-rich plants. In amongst the flowers, Ferim’s nephew was busy with the beehives, in Huck Finn dungarees, while his cousin helped him, in a floppy hessian hat with a veil attached. This is now the fourth generation of the family who have worked on beekeping, which has been a family tradition for 100 years. Ferim’s uncle, Nexhdet, is interested in taking the business in an additional direction with the production of cough syrups incorporating the honey. I’m certainly feeling healthier by the moment, just standing in the bucolic scene, watching where my honey comes from.

Nexhdet had advised that it is better to drink than to eat honey – that ideally it should be stirred into tea (good news for Thalie and her Silk Route spiced tea recipe!), but I’m afraid today I’ve ignored Ferim’s uncle’s advice, and just gorged myself by the spoonful on the delicious honey they gave me.

For more about my beekeeping and honey-tasting adventures in Kosovo, see my book Travels in Blood and Honey; becoming a beekeeper in Kosovo, published last year by Signal Books

This entry was posted in Kosovo. Bookmark the permalink.